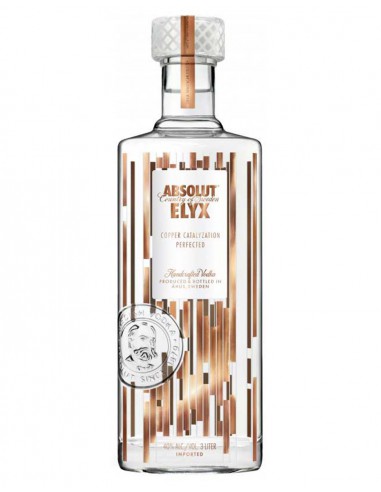 Absolut Elyx is the luxury vodka of the Absolut range. Made from a totally traditional method, it is distilled in a manual way in Copper Alambics dated from 1921 with winter wheat cultivated in the Råbelöf farm, just south of Sweden. This Swedish farm has cultivating winter wheat from the 15th century and enjoy an ideal climate to provide the best winter wheat.

The result is a vodka excellent with a design that It celebrates the luxury that is to taste a vodka of such caliber. The bottle of Absolut Elyx is produced with almost 40% recycled glass, faithful to the principles of Absolut. Thus, everything you need to produce Absolut Elyx and its elaborations are made within a radius of approximately 24 kilometers. On the nose it is dense, intense and round with notes to cereal and white chocolate. The softness that shows on the palate is exquisite with touches to nuts, bread and cereal along with mild spices. The end is soft and warm. A vodka Swedish spectacular with several gold medals in the San Francisco World Spirits Competition.

Capacity
4.5L
Made by
Absolut Company
Made in
Sweden
Proof
42.3% Vol.